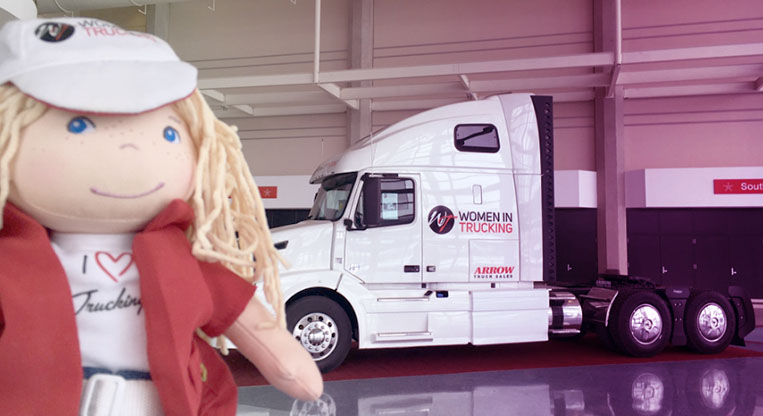 “One of the issues that we had was how do we reach the next generation? How do we let them know that there are great jobs and that they can do it? And so I always wanted a truck driver doll, and we tried to get Barbie to do it and we couldn’t get any interest from Barbie,” WIT President/CEO Ellen Voie said on “Morning in America.” “One day I happen to be sitting in a sky club and talk started talking to a woman sitting next to me. And she was president of HABA USA. And we created the doll. And there she is.”

The pandemic has made trucker shortages more severe as demand to move freight reaches historic highs. The American Trucking Associations, a large industry trade group, estimates that the nation is short about 80,000 drivers. This comes as Walmart said it is raising pay for its 12,000 truck drivers to entice new drivers. The starting range for new drivers will now be between $95,000 and $110,000, Walmart said last week.

Voie stressed that the industry has evolved significantly over the years from safety to work-life balance, saying, “This isn’t your grandpa’s trucking industry anymore.”

“The industry has changed a lot, there’s so much more technology on the trucks that makes them much safer, makes it much easier to operate. Also, the pay is the same whether you’re a female or a male, it doesn’t matter, the pay is the same. Because you’re either paid by the hour, the mile, the load,” Voie said. “Companies are really doing a lot of work to get drivers home, so much more. So work-life balance. And there are jobs where you can like haul trash or you know, make deliveries during the day and be home at night with your kids.”

Voie said now is a great time to start in the trucking industry amid skyrocketing pay.
“The pay has been going up a lot and it’s a great job,” Voie said. “It’s really something that women can do.”