The Long Road to Driverless Trucks

Self-driving eighteen-wheelers are now on highways in states like California and Texas. But there are still human “safety drivers” behind the wheel. What will it take to get them out?

In March 2022, a self-driving eighteen-wheeler spent more than five straight days hauling goods between Dallas and Atlanta. Running around the clock, it traveled more than 6,300 miles, making four round trips and delivering eight loads of freight.
The result of a partnership between Kodiak Robotics, a self-driving start-up, and U.S. Xpress, a traditional trucking company, this five-day drive demonstrated the enormous potential of autonomous trucks. A traditional truck, whose lone driver must stop and rest each day, would need more than 10 days to deliver the same freight.

But the drive also showed that the technology is not yet ready to realize its potential. Each day, Kodiak rotated a new team of specialists into the cab of its truck, so that someone could take control of the vehicle if anything went wrong. These “safety drivers” grabbed the wheel multiple times.
Tech start-ups like Kodiak have spent years building and testing self-driving trucks, and companies across the trucking industry are keen to reap the benefits. At a time when the global supply chain is struggling to deliver goods as efficiently as businesses and consumers now demand, autonomous trucks could alleviate bottlenecks and reduce costs.

Now comes the most difficult stretch in this quest to automate freight delivery: getting these trucks on the road without anyone behind the wheel.
Companies like Kodiak know the technology is a long way from the moment trucks can drive anywhere on their own. So they are looking for ways to deploy self-driving trucks solely on highways, whose long, uninterrupted stretches are easier to navigate than city streets teeming with stop-and-go traffic.

“Highways are a more structured environment,” said Alex Rodrigues, chief executive of the self-driving-truck start-up Embark. “You know where every car is supposed to be going. They’re in lanes. They’re headed in the same direction.”
Restricting these trucks to the highway also plays to their strengths. “The biggest problems for long-haul truckers are fatigue, distraction and boredom,” Mr. Rodrigues explained on a recent afternoon as one of his company’s trucks cruised down a highway in Northern California. “Robots don’t have a problem with any of that.”

It’s a sound strategy, but even this will require years of additional development.
Part of the challenge is technical. Though self-driving trucks can handle most of what happens on a highway — merging into traffic from an on-ramp, changing lanes, slowing for cars stopped on the shoulder — companies are still working to ensure they can respond to less common situations, like a sudden three-car pileup.

As he continued down the highway, Mr. Rodrigues said his company has yet to perfect what he calls evasive maneuvers. “If there is an accident in the road right in front of the vehicle,” he explained, “it has to stop itself quickly.” For this and other reasons, most companies do not plan on removing safety drivers from their trucks until at least 2024. In many states, they will need explicit approval from regulators to do so.
But deploying these trucks is also a logistical challenge — one that will require significant changes across the trucking industry. 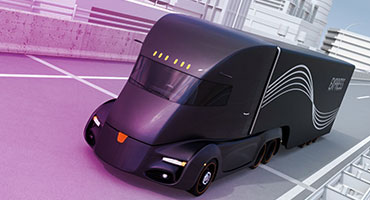 In shuttling goods between Dallas and Atlanta, Kodiak’s truck did not drive into either city. It drove to spots just off the highway where it could unload its cargo and refuel before making the return trip. Then traditional trucks picked up the cargo and drove “the last mile” or final leg of the delivery.

In order to deploy autonomous trucks on a large scale, companies must first build a network of these “transfer hubs.” With an eye toward this future, Kodiak recently inked a partnership with Pilot, a company that operates traditional truck stops across the country. Today, these are places where truck drivers can shower and rest and grab a bite to eat. The hope is that they can also serve as transfer hubs for driverless trucks.
“The industry can’t afford to build this kind of infrastructure from scratch,” said Kodiak’s chief executive, Don Burnette. “We have to find ways of working with the existing infrastructure.”

They must also consider the impact on truck drivers: They aim to make long-haul drivers obsolete, but they will need more drivers for the short haul.

Executives like Mr. Burnette and Mr. Rodrigues believe that drivers will happily move from one job to the other. The turnover rate among long-haul drivers is roughly 95 percent, meaning the average company replaces nearly its entire work force each year. It is a stressful, monotonous job that keeps people away from home for days on end. If they switch to city driving, they can work shorter hours and stay close to home.

But a recent study from researchers at Carnegie Mellon University and the University of Michigan questions whether the transition will be as smooth as many expect. Truck drivers are typically paid by the mile. A shift to shorter trips, the study says, could slash the number of miles traveled and reduce wages.
Certainly, some drivers fear they cannot make as much money driving solely in cities. Others are loath to give up their time on the highway.
“There are many drivers like me,” said Cannon Bryan, a 28-year-old long-haul trucker from Texas. “I wasn’t born in the city. I wasn’t raised in the city. I hate city driving. I enjoy picking up a load in Dallas and driving to Grand Rapids, Mich.”

Building and deploying self-driving trucks is far from easy. And it is enormously expensive — on the order of hundreds of millions of dollars a year. TuSimple, a self-driving truck company, has faced concerns that the technology is unsafe after federal regulators revealed that one of its trucks had been involved in an accident. Aurora, a self-driving technology company with a particularly impressive pedigree, is facing challenging market conditions and has floated the possibility of a sale to big names like Apple or Microsoft, according to a report from Bloomberg News.

If these companies can indeed get drivers out of their vehicles, this raises new questions. How will driverless trucks handle roadside inspections? How will they set up the reflective triangles that warn other motorists when a truck has pulled to the shoulder? How will they deal with blown tires and repairs?

Eventually, the industry will also embrace electric trucks powered by battery rather than fossil fuel, and this will raise still more questions for autonomous trucking. Where and how will the batteries get recharged? Won’t this prevent self-driving trucks from running 24 hours a day, as the industry has promised?

“There are so many issues that in reality are far more complex than they might seem on paper,” said Steve Viscelli, an economic and political sociologist at the University of Pennsylvania who specializes in trucking. “Though the developers and their partners are putting a lot of effort into thinking this through, many of the questions about what needs to change cannot yet be answered. We are going to have to see what reality looks like.”

Some solutions will be technical, others logistical. The start-up Embark plans to build a roaming work force of “guardians” who will locate trucks when things go wrong and call for repairs as needed.

The good news for the labor market is that this technology will create jobs even as it removes them. And though experts say that more jobs will ultimately be lost than gained, this will not happen soon. Long-haul truckers will have years to prepare for a new life. Any rollout will be gradual.

“Just when you think this technology is almost here,” said Tom Schmitt, the chief executive of Forward Air, a trucking company that just started a test with Kodiak’s self-driving trucks, “it is still five years away.”